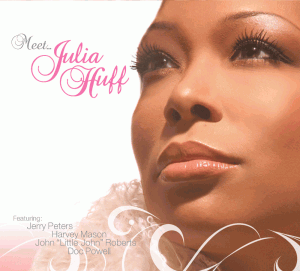 Some say when you have it, you have it! Julia Huff’s music has the kind of energy that no matter where she performs, Julia always leave’s her audience with an experience that adds value to the spaces and lives around them.

Julia is a former news reporter for City News Bureau of Chicago and NBC affiliate WICD-TV in Champaign Illinois. Julia is also a former print and tradeshow model.  Julia has worked with the legendary Jerry Peters known for his work with artist such as Phyllis Hyman and Earth Wind & Fire.  Julia will be releasing her new single “Makeup On the Floor” at the end of the first quarter 2020. The hit single was written and produced the legendary Herb Middleton renowned for his work with Mary J. Blige, Sounds of Blackness and Ann Nesby.

“Makeup On The Floor” is a follow up to Julia’s previous single “Who’s Gonna Hold Me Now” which continues to be featured on several music playlists around the world. Julia’s new single is sure to be a hit with any who loves to step, line dance and skate.

Julia Huff has been faithfully working the Chicago nightclub scene 3 to 4 nights a week gigging with her group Julia Huff & The Company Band.  Julia has performed in such venues as Jilly’s, The Back Room, festivals such as “Taste of Chicago” and the Hyde Park Jazz Festival,” as well as headlining a host of private receptions, weddings and corporate events galas. In addition to performing in Chicago, Julia has played in Detroit, Atlanta and LA.  Julia also has had music residencies in Russia and Japan; and even scored a few radio and television interviews.